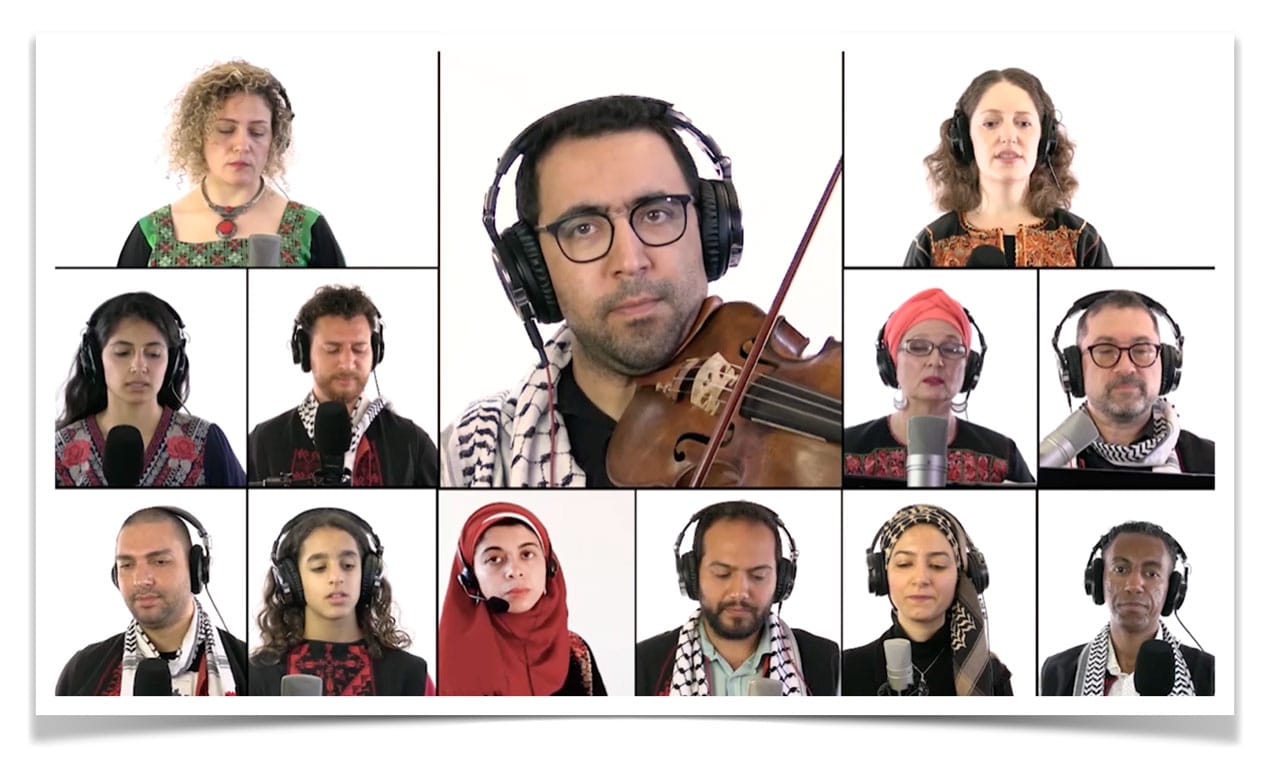 ASWAT is the Bay Area’s Premier Arab Music Ensemble. Aswat is a multi-ethnic and multi-racial music ensemble that reaches out to the diverse Bay Area community with folkloric, classical, and contemporary Arabic music. Aswat’s doors remain open to all who want to participate in the exciting, enriching exchange between Arab Americans and other communities through the universal language of music.

Nabila Mango, founder of Aswat and Zawaya (Zawaya is a non-profit organization that seeks to contribute to the multicultural discourse of the Bay Area with the Arab Arts) asked me if I could co-produce and live stream a Palestinian music and cultural concert to celebrate Aswat’s twentieth anniversary of Arab music in the Bay Area. It was an important benchmark to celebrate.

Unfortunately the ensemble had to cancel many events due to the pandemic, and a virtual event seemed the best option to explore.

We are extremely pleased with the excellent job Alan Cash Video did filming our most recent concert. We’ve been recommending him to everyone in the Bay Area. We love his comments, whenever we thank him he’ll say “it’s a labor of love.” Keep it up Alan, love is needed too badly these days.

How do you produce a concert with so many people safely?

The Aswat Ensemble has 40 musicians and singers, but since COVID it has been challenging for members to participate. Singing in group settings is an apparent risk for outbreaks of Coronavirus and produces a larger number of respiratory droplets than speaking. Filming all the members of the ensemble at least ten feet apart would be a major videography challenge.

After much discussion on regular Zoom meetings, The organizers decided that the program would consist of virtual events on two days (Oct 24 and Oct 25). They would be pre-recorded and simulcasted to Facebook, YouTube Premiere and Zoom. Each event would last for approximately two hours.

We were all enthusiastic, but none of us had the experience to produce an event of this scale. 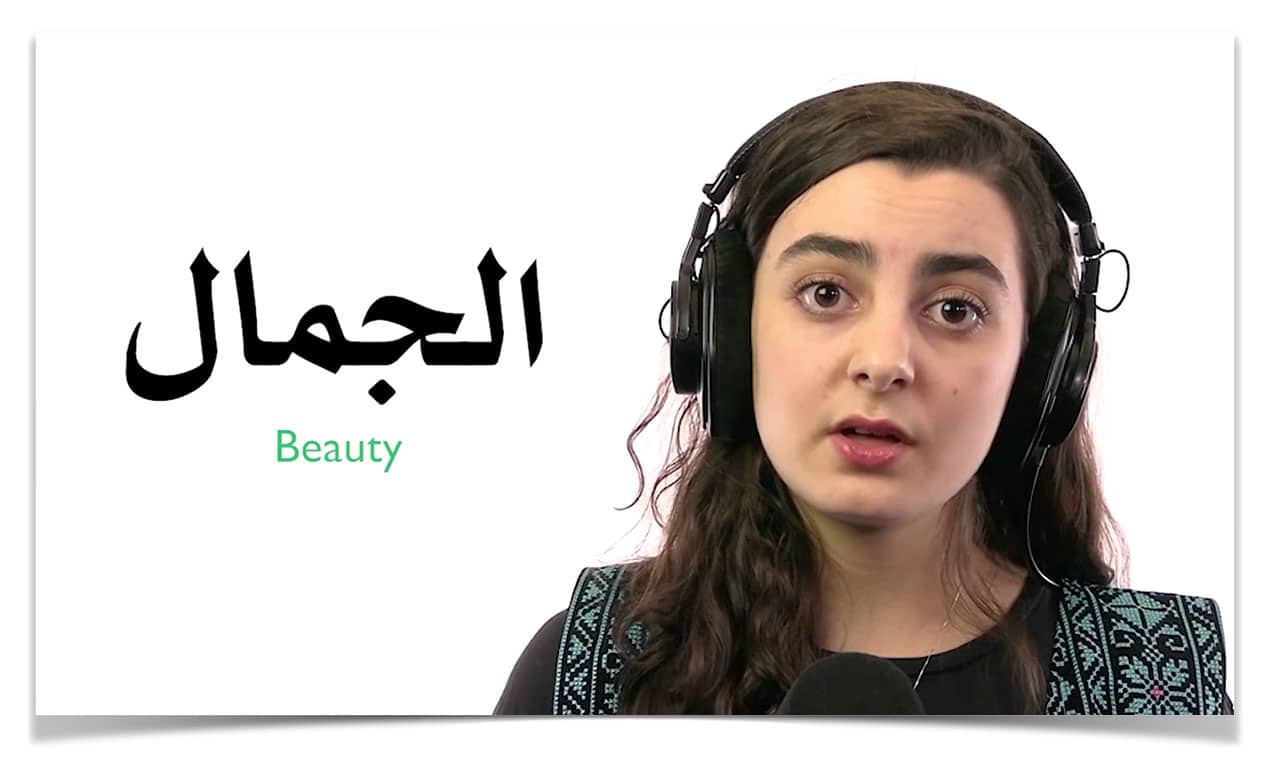 The theme for Aswat’s twentieth anniversary would feature Palestinian and Arab culture and diversity. It would showcase many songs from the Aswat ensemble and include short documentaries on education, arts, music, cuisine, embroidery, poetry plus interviews.

The logistics were complicated as all the musicians would record their parts individually. We had to find a suitable venue to record, schedule all the musicians, including Andrew Heller (www.audioprogroup.com) who would mix and sound record the ensemble. Salaheddine Bedoui, the Aswat music director would conduct and be present at each recording. 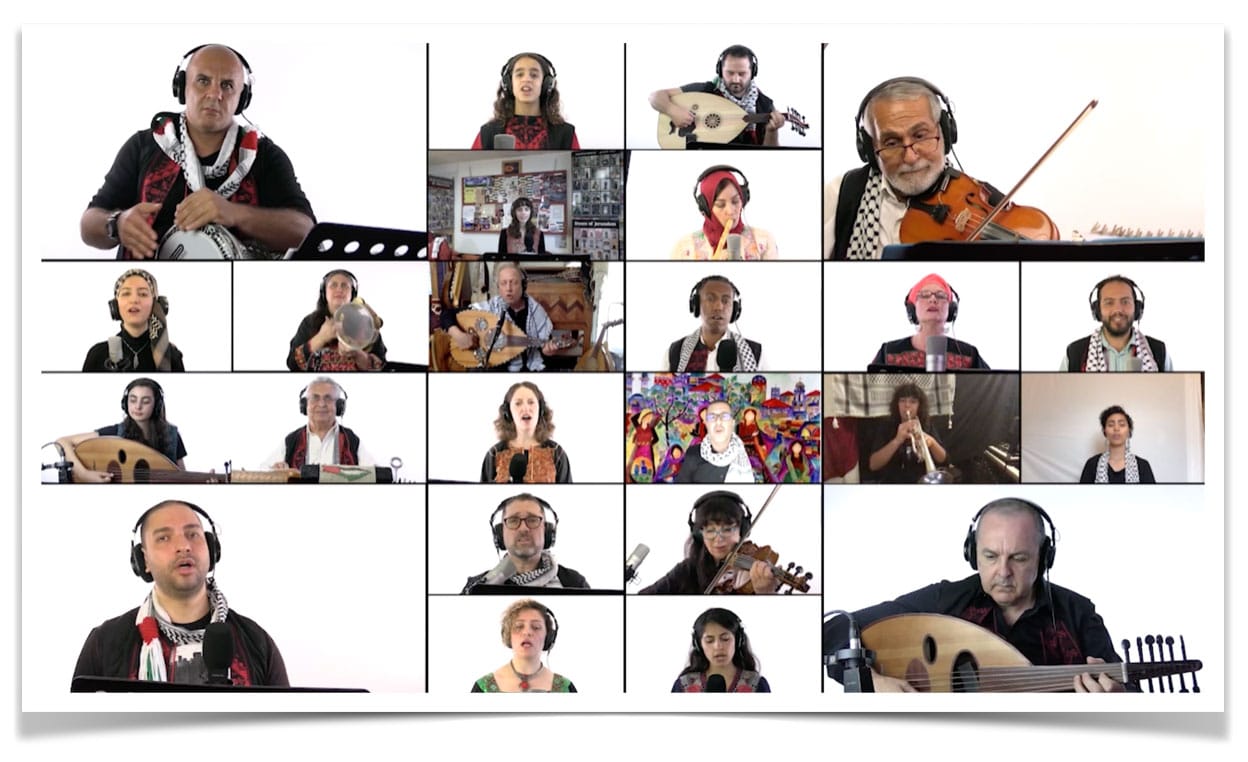 Musicians and singers edited in variations of the Zoom grid format

Unfortunately, a few of the musicians were not available to attend but they sent in their synced recordings and video.

The schedule and budget would not allow me to be present at each recording, so I recommended that Aswat buy their own video camera. 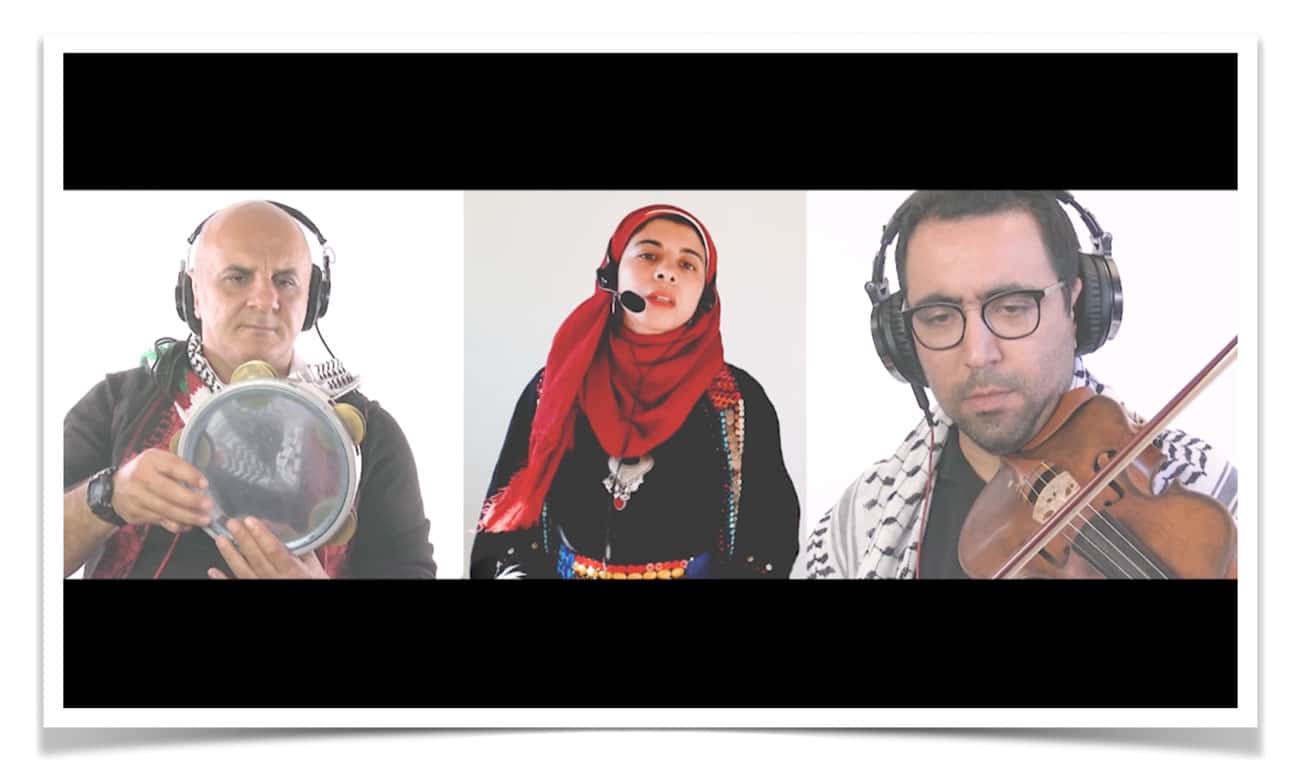 I set up all the video production equipment, including video camera, lights and backdrop and placed everyone on a white background. This would feature each artist with no background distractions. The songs would be edited into a Zoom like format which has become a new genre.

Salah, the music director, would film each musician as well as conduct and record them. The individual videos were then sent to me for editing. 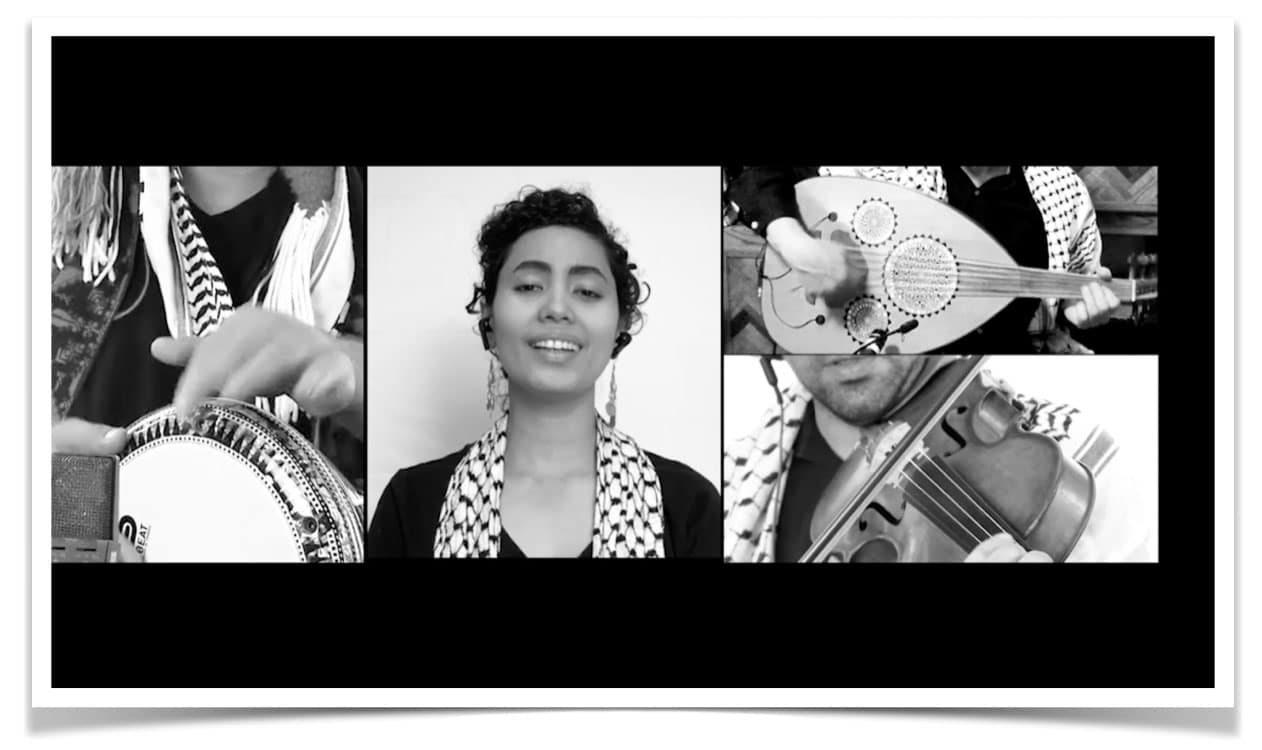 In retrospect, we should have given ourselves a month on production. This was a huge undertaking of time and energy – although a labor of love for those involved.

Saboor Bidar assisted me with fabulous motion graphics and additional editing. We both worked long days and nights to meet the challenging schedule. 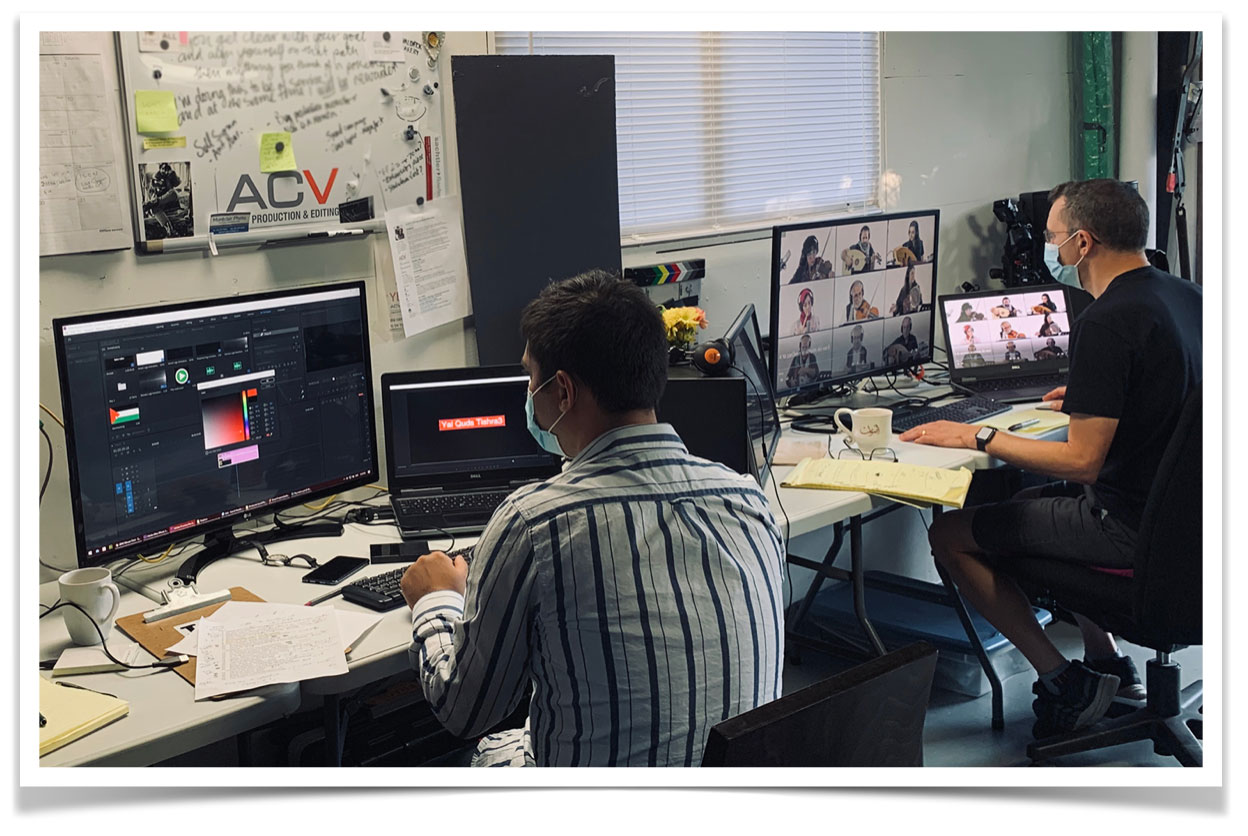 Eventually we were ready for a tech rehearsal the day before the event and simultaneously tested the live stream to Zoom, Facebook and YouTube Premiere. 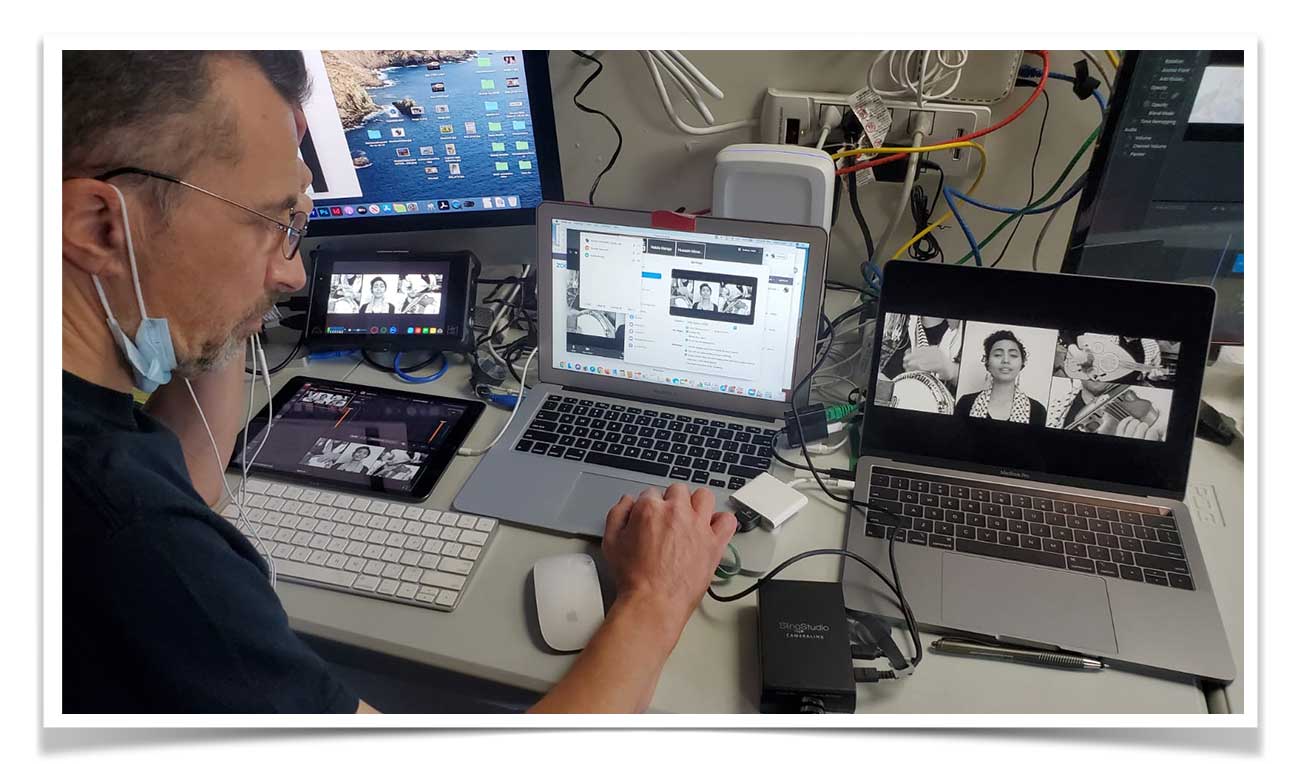 On October 24 and 25 the two hour shows (total 4 hours) aired out into the world for the global premiere.

The events were timed so that online viewers in Jerusalem and the Arab world could tune in at a timely hour.

Both events were a tremendous success and praise came from a national and international audience.

For me, personally, it was a wonderful project and a privilege to be welcomed into the ASWAT family and their community. Their music is beautiful and they sang and played to perfection.

Vsit the ASWAT events on their YouTube page and if possible please donate to this amazing ensemble.

Link of Aswat songs only link

Thank you very much to Nabila Mango and Salaheddine Bedoui for your good vibes, Palestinian hospitality and great food!

About Zawaya
Zawaya is a non-profit organization that seeks to contribute to the multicultural discourse of the Bay Area with the Arab Arts. Zawaya means “aspects” or “corners”, suggesting the many art forms to be discovered and enjoyed in Arab culture. It was founded in 2003 by Nabila Mango and Haya Shawwa Ben-Halim, two Arab-American women who recognized that the challenges faced by the Arab-American community in the Bay Area requires a creative response. With Zawaya, they sought to give the Arab community a voice, including a musical one. Aiming to address stereotypes and misconceptions, Zawaya offers a genuine image of Arab Americans and their rich civilization, which can only be a source of strength for American society.

Zawaya is the umbrella organization for the music group Aswat composed of approximately 40 musicians and singers. Zawaya aspires to expand its future programming to all other Arabic art forms, such as dance, theatre, poetry recitations, calligraphy, needle point crafts, and photography.