ACV teams up with QVC TV 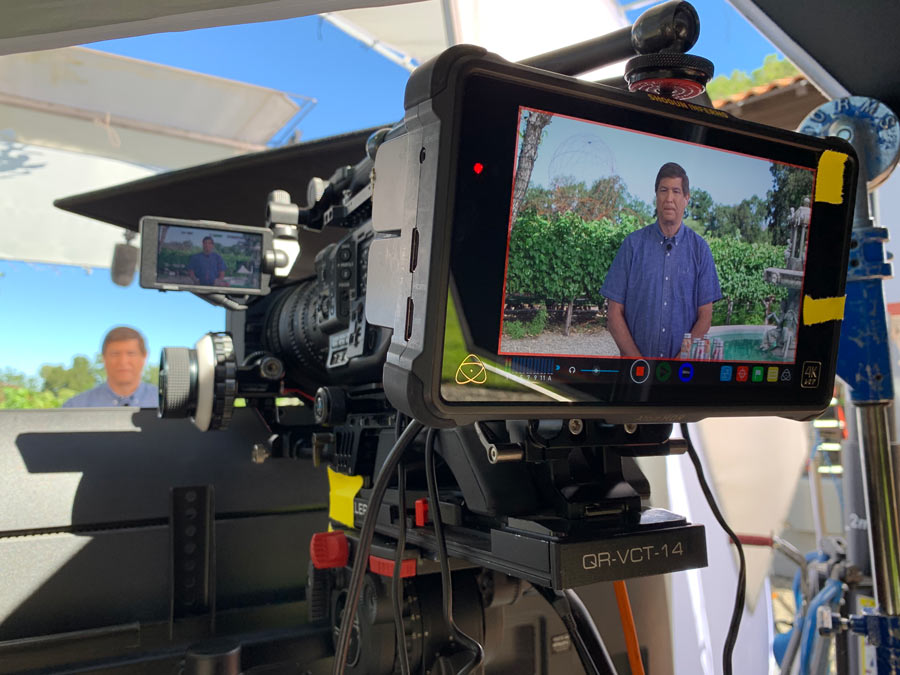 ACV recently had the opportunity to film and livestream TV broadcasts to the QVC TV shopping channel for our client, Vintage Wine Estates.

QVC is an American shopping television network founded in 1986. They broadcast nationwide and also have a worldwide network.

This production was a logistical challenge from the start. It took place outdoors in the vineyard at the beautiful Clos Pegase Winery in Napa. Selling times were spaced over a 24 hour period lasting 15 to 45 mins. 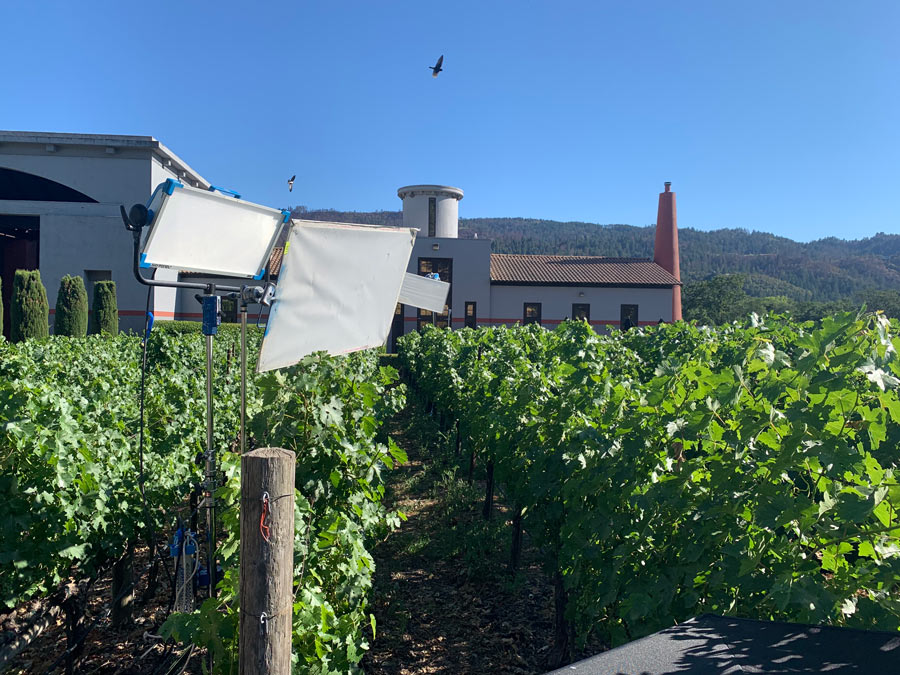 At the Clos Pegase Vineyard in Napa

Filming this production in the vineyard, meant we had to take into consideration all environmental factors, anything from rain, extreme wind, changing light conditions, outdoor noise, earthquake etc. 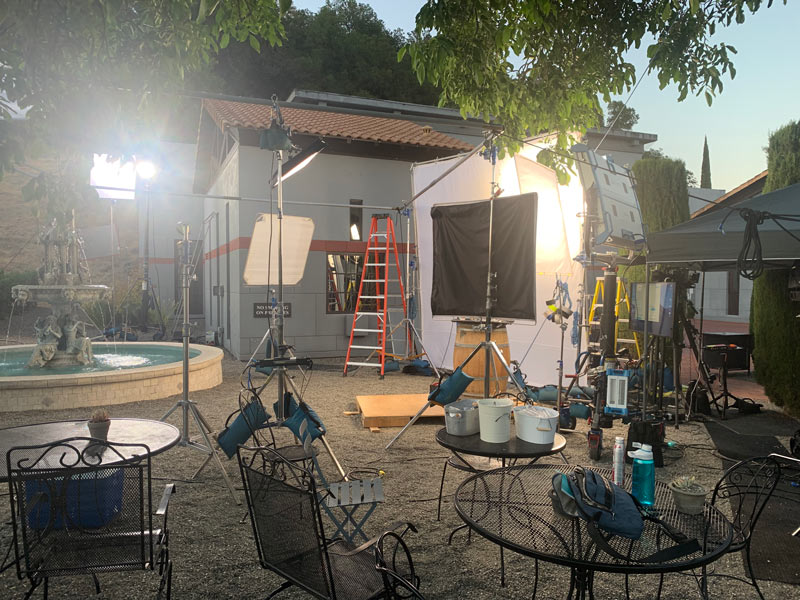 This shoot had complexity, so I asked my colleague Bill Knowland, from Direct Images Interactive to co-manage this project.

Bill and I have worked together on many interesting shoots, and I knew our collaboration would make this project a success. 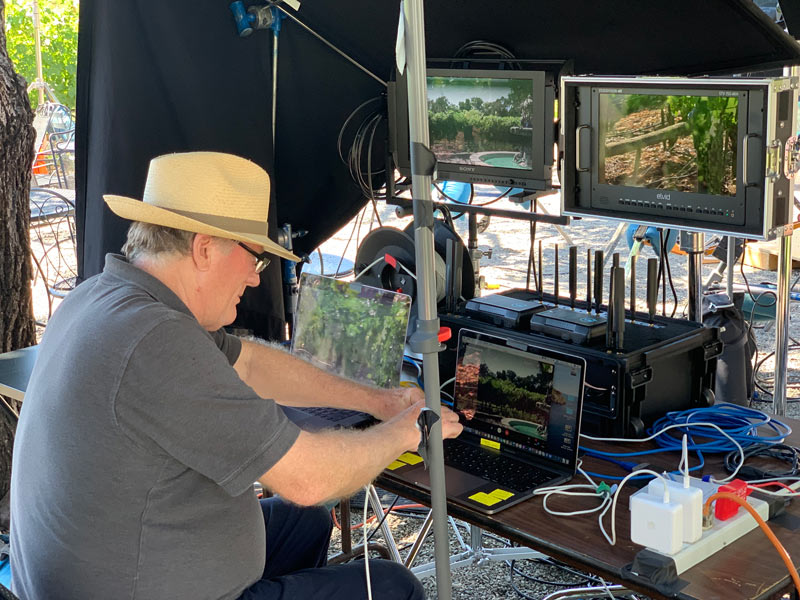 Several weeks prior to the shoot, we conducted in-depth site surveys to fully evaluate all aspects of environment and facility. We also supplied the client test shots for best camera angles and composition.

Preparation is always the foundation for a successful shoot.

Part of ACV pre-planning check list, is having backups of all major pieces of equipment. If something were to happen (and let’s face it, this is technology), you just have to deal with it in the moment. The best strategy is swapping out the unit for a backup and solving the issue on the spot. Everything has to be in place beforehand, so there is efficiency and low stress.

The live stream was a two camera shoot focused mainly on the QVC host. Bryan sold a range of products called ‘Gaze’ a fruity wine cocktail in several flavors. The host had two way interactivity between the New York studio, and live communication had to work seamlessly.

Another camera was placed in the vineyard as an establishing angle. QVC switched angles accordingly from their HQ. 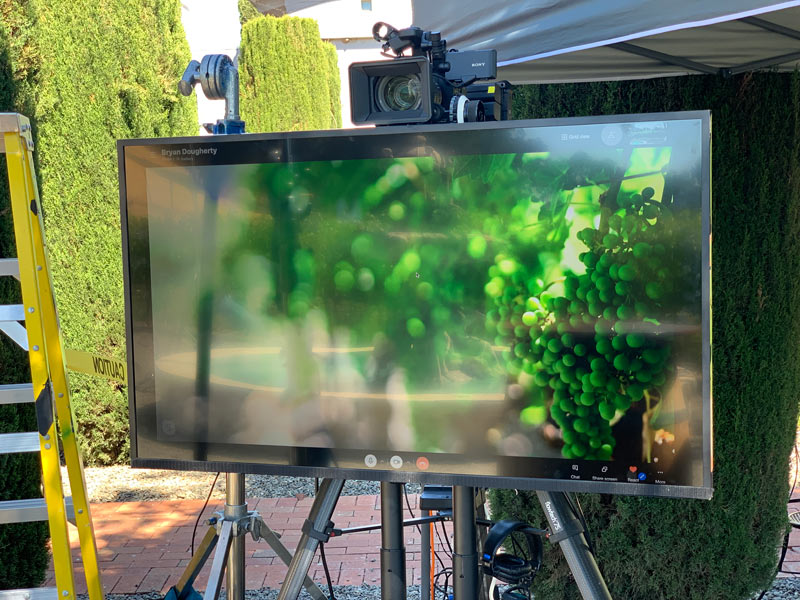 Interactive monitor for our host and second camera angle

We used Skype as our streaming platform and there were approximately eight selling shots between 15 – 45 minutes, depending on time of day or night.

To further manage the set, we employed the services of experienced gaffer colleague, Alan Steinheimer. Alan and his team managed lighting and secured the set as best as possible from the extreme environmental factors. Napa in June, during the day, is sweltering and the sun is intense.  At night, it can be cold and windy, so very extreme and contrasting filming conditions.

To secure the area and make filming more manageable, our gaffer’s team placed a 20’ x 20’ diffused covering completely over the set. They also provided backlighting for the vineyard and key and fill lighting for the host. 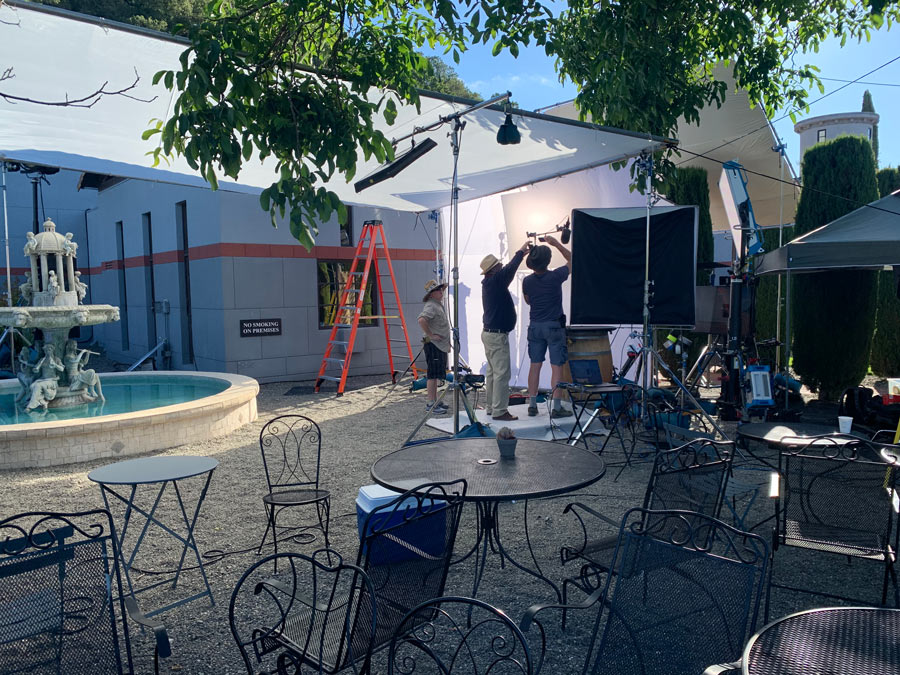 The 9:00PM PST selling kick off took place and the live stream began. There were a few seconds when our host’s bluetooth headset stopped working, but it was only a small glitch and resolved itself quickly. With the first of eight broadcasts completed, it gave us peace of mind that our prep work was paying off.

We returned to our hotel rooms around midnight and began again the next day at 5:00AM for a full day of live broadcasts. Our equipment was left outside in place in the vineyard with security guarding throughout the night.

Luckily the night weather prevailed. No fog drip, wind or rain and our equipment was ready to go after a strong cup of coffee.

Our task was completed by the end of the third day and the event was a success!

I’m happy to say that ACV is now booked again for their October sell spots. Check it out live on the QVC shopping channel on October 12 and 13, 2021

To see a short clip of the last event. Check this link