Multi-camera live-Streaming Event at the Impact Hub, Oakland. Inspiring better cities—that’s the mission of Next City.

Impact Hub, Oakland is inspiring better cities — that’s the mission of Next City.

Try to imagine a future where cities are not in crisis. Instead, they’re leading the way toward a more sustainable, equitable future. That’s what Next City is all about. Next City provides daily online coverage of the leaders, policies and innovations driving progress in metropolitan regions around the world.

Alan Cash Video in collaboration with Audio Visual Consultants (https://avconsultants.com) were delighted when nonprofit Next City engaged us to live stream their Spaces and Places event at Oakland’s popular coworking space, Impact Hub. The video was streamed in real time via GotoWebinar for online registrants. 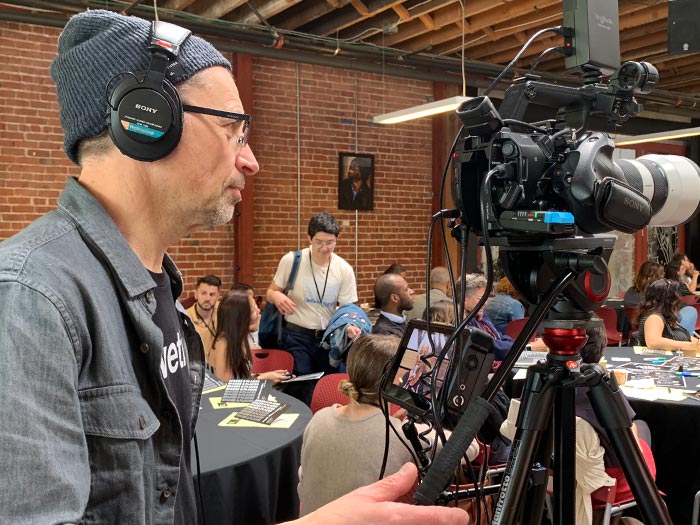 Alan Cash at the helm

A live streaming event requires a significant amount of preparation. I am obsessive about details. Everything has to work seamlessly. Because everything is live, there is very little margin for error. Our online audience is relying on a professional broadcast at a specific time; they expect everything to work smoothly, yet we’re relying on house internet access, which can be disrupted. Connections can go down, computers can fail. We always have backups of the main components to ensure a successful shoot.

Prior to any live streaming event, I solicit client requirements with a live stream event brief. Once we have confirmed details and signed a contract, I conduct a thorough site survey to test all facility connections, camera placement, lights and audio options.

Showcasing presenters, panel and audience for the Next City shoot:

To create visual variety, we had four different camera angles to showcase the presenters, the panel and the audience.
My colleague and partner, videographer Stu Sweetow, and our two assistants operated the cameras. The feed was live-switched to include PowerPoint slides. 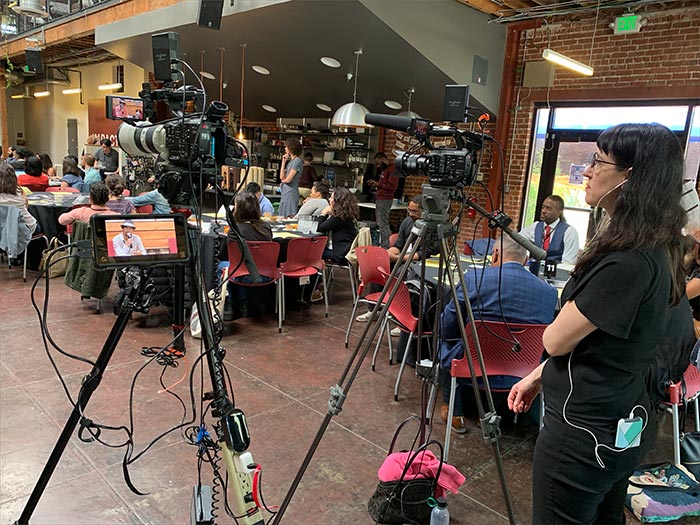 Sarah who assisted us with the live stream

We can add titles and graphics to the screen. These can also be synched to appear as speakers present themselves live. Both of these options need to be set up in advance.

Technical details of the Next City shoot

Why we’re doing more live streaming video for our clients

A big advantage of live streaming video is that it can reach those who may not be able to attend the live event. The Next City shoot is a good example. Their audience is local and national, but the Impact Hub capacity is limited. A nearly unlimited number of viewers can access the video in real time via GotoWebinar.

The benefits of live streaming video:

Learn more about our Oakland video production service here and expand the reach of your next presentation! Consider live streaming video with Alan Cash Video — call us at 510.590.8532.

Alan live streamed a 6-hour presentation for my nonprofit. The quality was great and over 250 people were able to tune in online as a result. He was very kind and professional and went above and beyond for us. He helped us set up the video in advance and helped edit the footage afterwards. He is by far the best videographer that we have worked with. We would absolutely hire him again!