Every once in a while, a shoot turns into an extraordinary experience.

Sometimes we just get lucky. When a colleague asked me to fill in for him as the lead videographer at the Ron Dellums’ memorial service, I assured him I could fit this into my calendar. 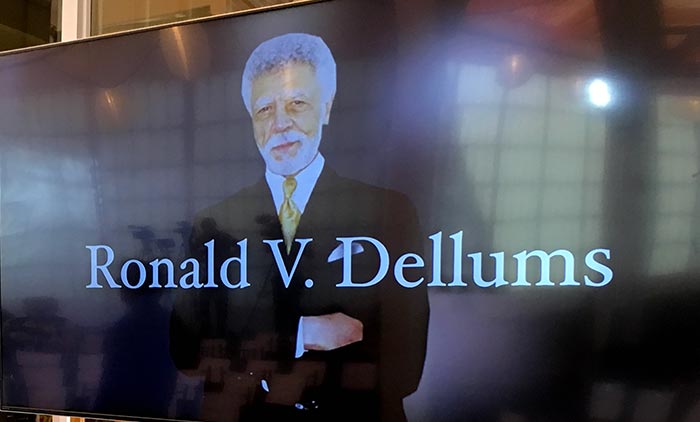 Ron Dellums: A legacy of service and a dedicated civil rights leader

Ron Dellums worked on the front lines of human rights for more than 30 years–in Washington, D.C. and here at home. When he died in July, 2018, more than 500 of his friends, family and colleagues gathered to remember a man who had spent his life in public service.

Dellums was a Marine and a social worker, a Berkeley City Councilman and a U.S. Congressman. Ron Dellums’ memorial service guest list was a who’s who of political and social elite who spanned decades and remain relevant, including speakers Barbara Lee and Nancy Pelosi. Incredibly, Stevie Wonder made a surprise appearance and sang, “If It’s Magic” and “Love’s in Need of Love Today”. 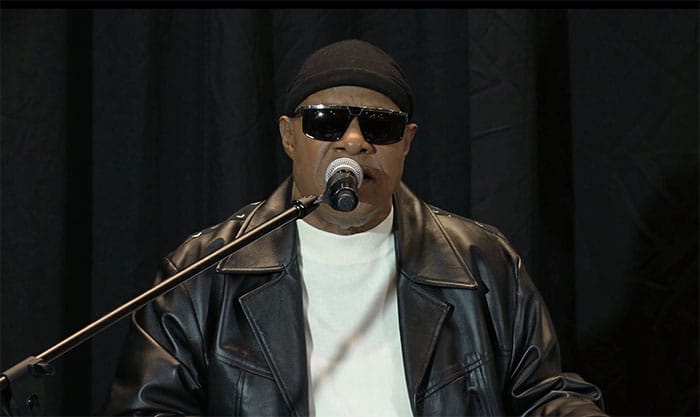 Every shoot begins with obsessive attention to technical details

I spend a lot of time prior to each shoot setting up and testing to make sure I’ve done everything I can to create the best possible result. I invest in quality equipment, and I always carry backups in the event of equipment failure.

While I’m always aware of the program I’m filming, I’m more focused on the technical details of the shoot—lighting, camera positions, framing and achieving optimal sound clarity. For the Ron Dellums memorial service shoot, my assistant Mitch and I used multiple cameras. 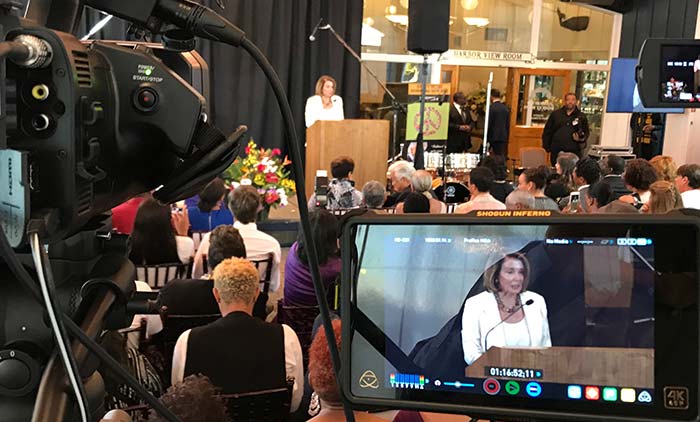 Nancy Pelosi was one of the distinguished guests

The video feed was projected onto large screens positioned around the venue, as the crowd spilled over into every room of the Jack London Square facility.

The event setup needed to be orchestrated carefully so that I could seamlessly capture speakers, musicians, the Dellums’ family members and interactions within the community. I used two very stable video riser platforms to make sure I was above the heads of people in the audience.

I always think about how a video is going to be used. In this case, the film was a live feed at the venue on several large screens as well as an archive capture of the event. Video is storytelling and has to have a certain rhythm and flow. As I filmed this event, capturing the musical performances and the heartfelt messages from the speakers, I was aware that I was creating an important memory for Mayor Dellums’ family and all those who attended.

Do you have an upcoming special event that you want to capture on video? Learn more about our Oakland video production service here. Contact Alan Cash Video about filming your event.

Alan Cash and his crew helped me co-produce video coverage of a large Memorial of over 300 people in Oakland in a technically very challenging environment. As an Emmy Award winning Cinematographer I am used to a high level of quality, both technically and in the realm of personality and reliability. Alan exceeded every hope and expectation and I can highly recommend his services.