‘It was a beautiful October morning and the sun shone brightly over the Napa Valley. Our client, Vintage Wine Estates, asked ACV to film another QVC TV 24 hour live broadcast. 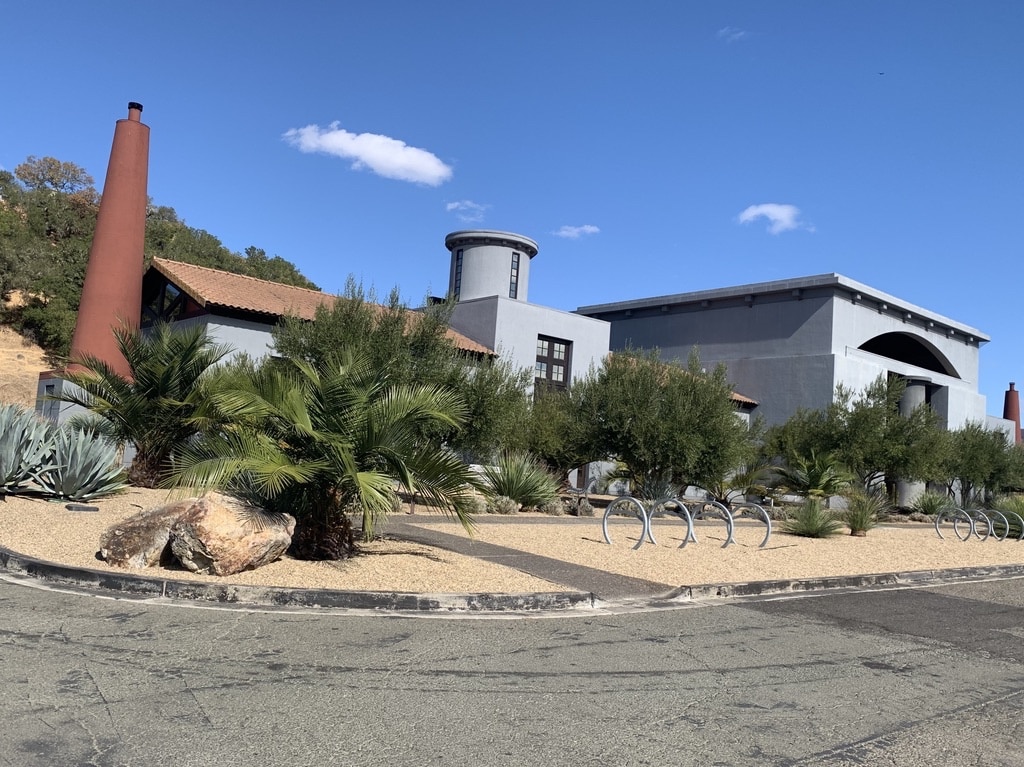 My colleague, Bill Knowland and I were grateful for this second opportunity to film at the beautiful Clos Pegase Winery, in Calistoga. 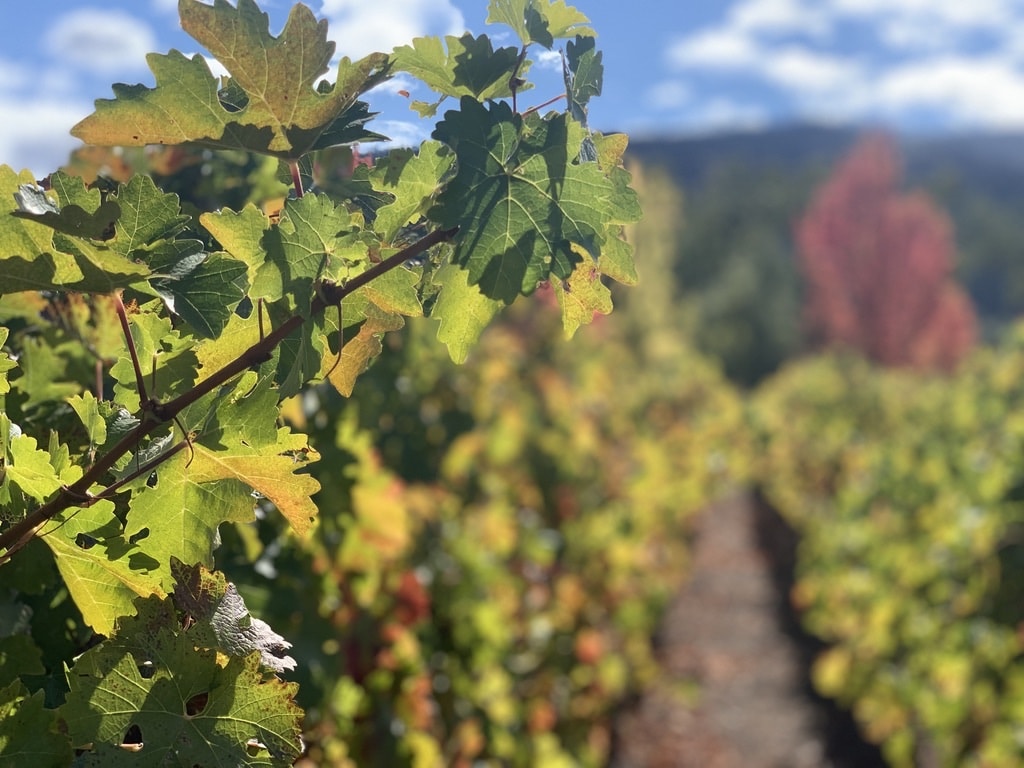 We set out early from the Bay Area in October 2021, and drove the picturesque roads surrounded by ripe vineyards.

Clos Pegase is in the heart of the Napa Valley. The fires were devastating in 2020. Many trees and the surrounding area had been burnt to a cinder, but luckily, Clos Pegase Winery, survived intact.

Two weeks prior to the shoot, we conducted a site survey to establish possible filming areas within the winery. We tested the speed of the network, placement for cameras, tested out the room sound, located access power points and general lay of the land.

For this shoot, we filmed in the smaller tasting room adjacent to the entrance. The space had high ceilings and was sophisticated. 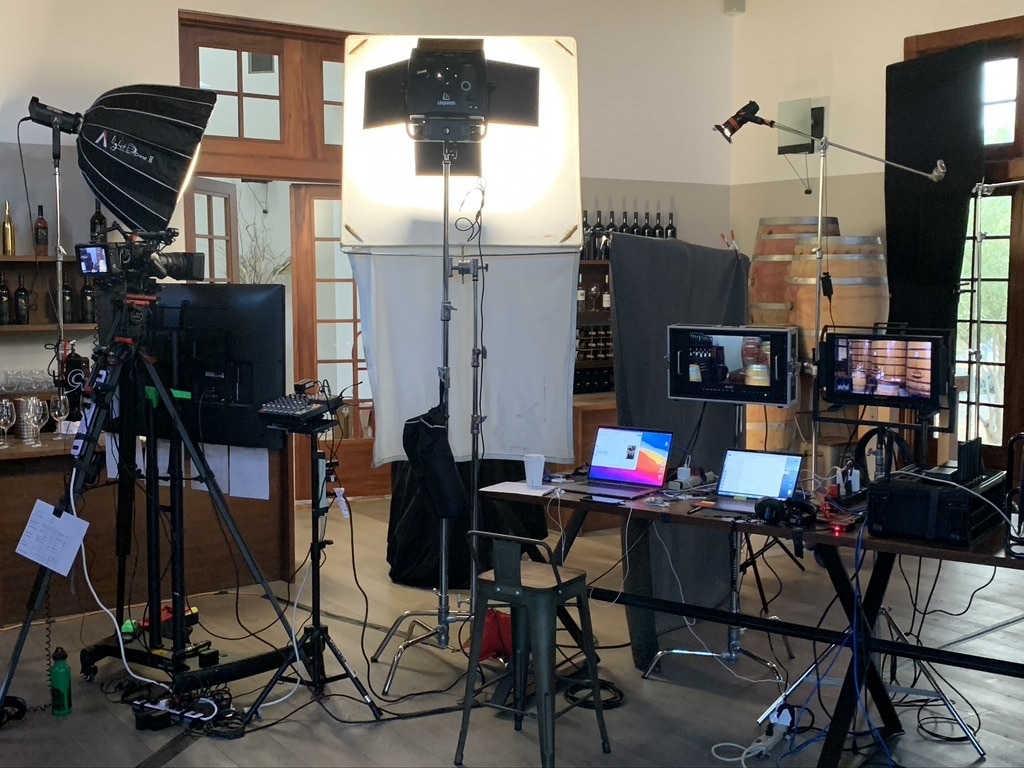 The filming set in the Clos Pegase tasting room

Our client wanted the tasting area to look more a wine production area. Something similar to the Cask Room where wine is stored in huge wooden casks. Unfortunately, the Cask Room was unavailable for the main production, due to the harvest season, which is their busiest period of the year.

Additional wine barrels were brought into the tasting room and our first task was to make the set look great. This involved trial and error until it looked just right.

Bill and I set up two Sony FS5mk ii cameras, two production monitors, lighting and a production control area. Bill handled switching and production and I operated the cameras. 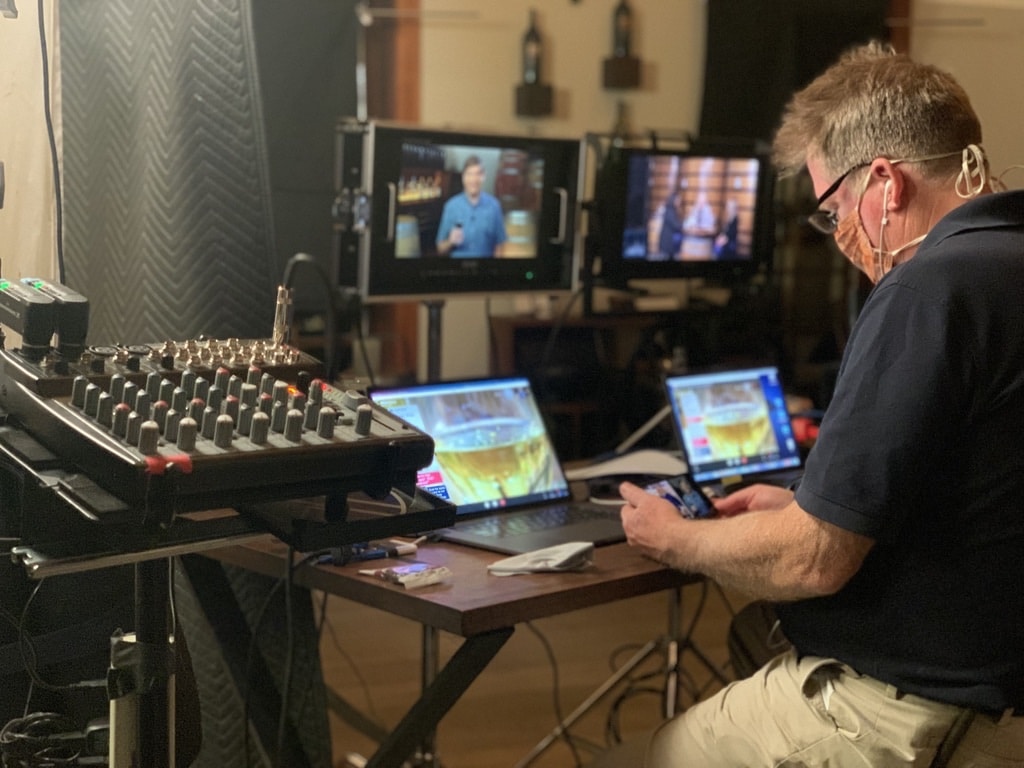 One of our challenges, was to block off all the natural lighting around the room and make sure that the host’s voice had no echo. In order to do that, we used multiple c-stands with flags to block window light, and moving blankets around the main speaking area to dampen the sound. In addition, we used a traditional three point studio lighting setup. 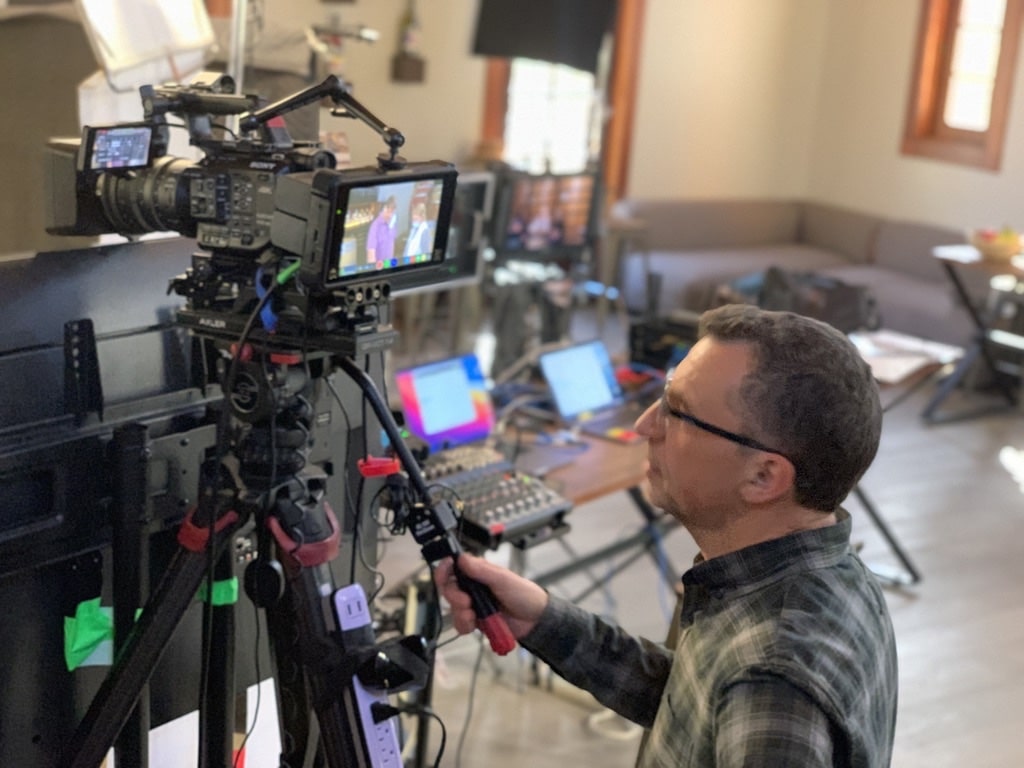 We also ran 200 ft of SDI cable with one additional b-roll camera filming clients in the Cask Room. 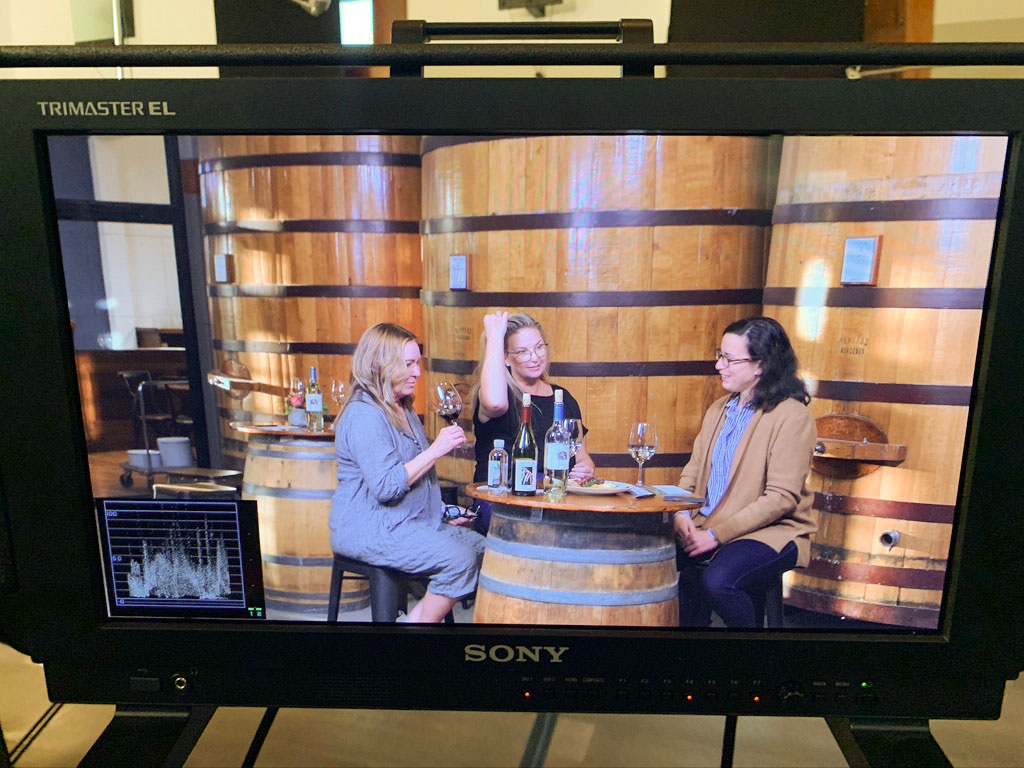 QVC TV host Bryan Dougherty and his assistant Trissie helped finalize the finished result. They were totally involved in all aspects of production. 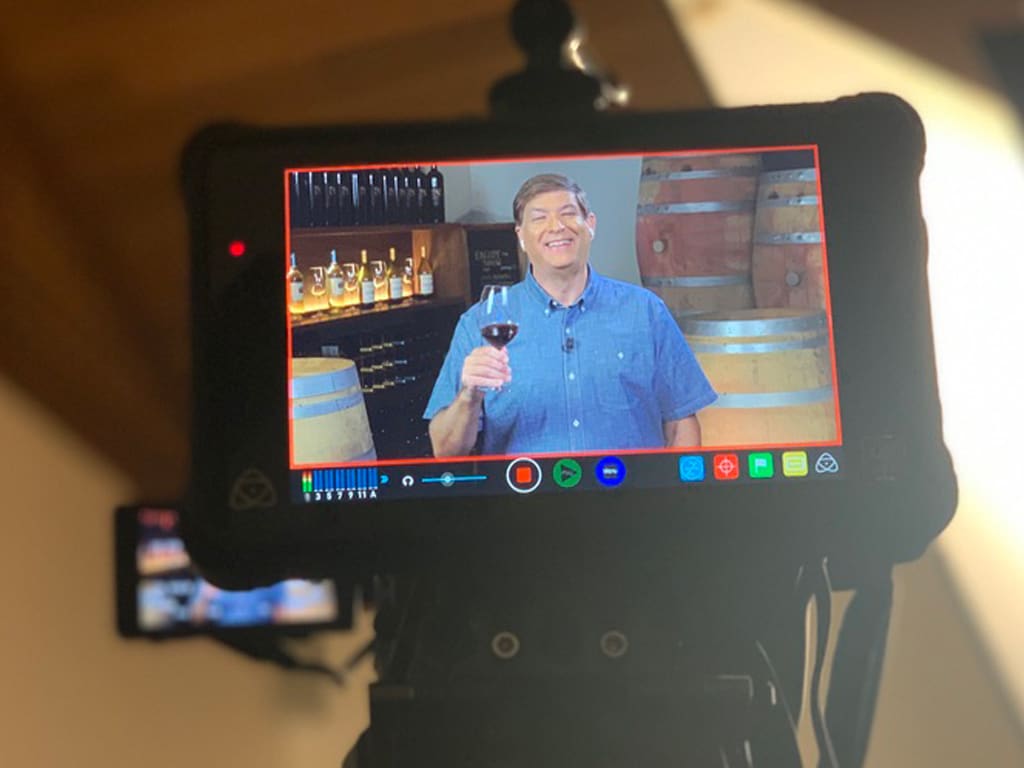 Our first test or ‘first look’ was scheduled for 5pm on Monday night. Bryan would present a test run through Skype, to the QVC studio in New York. This test was to make sure that video and audio met broadcast standards and that everything was on par.

Our broadcast schedule had multiple selling slots within a 24 hour period. Most slots lasted between 30 mins to an hour. The first kick off broadcast (and also the most profitable selling slot) started at 9pm and was live on national TV for one hour. 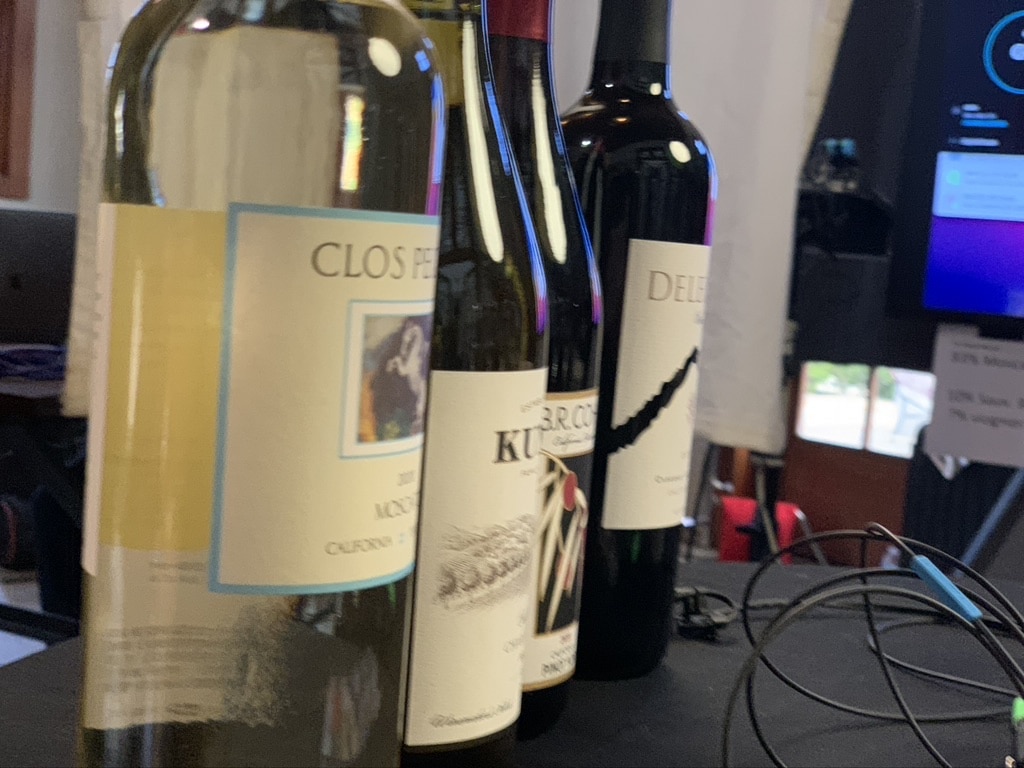 Bottles of Best of Wine Country series on set

Vintage Wine estates sell their ‘Today’s Special Value’ (TSV) wines on the QVC TV shopping channel two to three times a year. This time they promoted their Best of Wine Country Series, a collection of 12 wines in a box all of superb quality and great value.

This shoot went very well due to diligent prep and testing. Our client was extremely satisfied and has now scheduled ACV to film their next live broadcast this March with Shark Tank’s, Kevin O’Leary.

Check it out on the QVC TV shopping channel and treat yourselves to their fine collection of wines. Scheduled for March 22 and 23.